New York Times reporter Scott Shane and Washington Post research editor Alice Crites educated and entertained the crowd at a joint meeting of the SLA Government Information Division (DGI) and the ALA Government Documents Roundtable (GODORT) in Arlington, Virginia, on October 15. Scott and Alice discussed how they find and use government information, what their favorite sources are, and which documents even they have trouble tracking down. Scott told the crowd that librarians probably see many more documents than he does, so please feel free to send any “smoking memos” to [email protected]. Alice waited for Scott to leave the room before requesting that hot documents instead be sent to [email protected]. 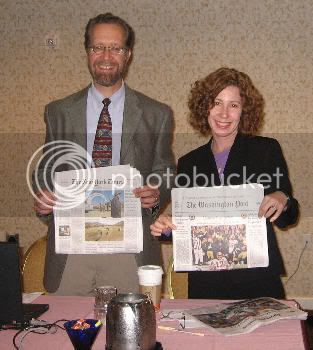 Scott Shane covers the national security and intelligence beat at the Times. He is the author of Dismantling Utopia: How Information Ended the Soviet Union (Chicago: Ivan R. Dee, 1994). At the Times, he has covered such stories as the 2006 intelligence agency attempt to reclassify already-public documents at the National Archives and the 2007 trial of Scooter Libby.

Scott said he loves documents because they are fixed in time, unlike people whose memories and stories morph over time. Good documents reveal more than the author intended, and Scott told a story that illustrates the indirect way a reporter may use a document to uncover intelligence. When the White House report Our National Strategy for Victory in Iraq was originally released, the electronic file’s document properties showed the original author as “feaver_p”. Peter Feaver worked in the White House and was a political scientist from Duke University. Scott called a colleague of Feaver’s at Duke and learned that their research centered on the proposition that people will support a tough war if they think victory is in sight. For the resulting December 4, 2005 Times article, see http://www.nytimes.com/2005/12 /04/politics/04strategy.html (registration required).

Scott is a heavy user of the Freedom of Information Act, but the process is too slow to help with most news deadlines. He’ll file a FOIA request when he has an idea or a “passing thought” that might relate to a long-term project. By the time the documents arrive, he has usually forgotten about making the request. Getting the envelope is “just like Christmas.” Scott and Alice noted that one can FOIA an agency’s FOIA release list. Documents on that list will arrive sooner because they have already been located and cleared by the agency. Scott is still waiting for a positive response from the State Department to a FOIA request for documents relating to Secretary Colin Powell’s February 2003 WMD speech before the United Nations Security Council.

Since Scott works on national security and intelligence issues, much of the information that would assist his coverage is classified and not available until long after the fact. Scott says a favorite source is the CREST (CIA Records Search Tool) database of historical, unclassified intelligence documents that can be used on-site at the National Archives. He said his colleagues laugh at him because he gets scoops from 1964.

When Scott asked the audience of librarians what they would most like to see improved in news coverage, they called out for better citations. When a report is mentioned, give the full title. Scott blamed copy editors and the need to keep articles short, but he took the advice to heart. Alice mentioned that the Post is trying to attach original documents to related articles on the paper’s web version, as staff and time permit. (One example can be found on the Post’s archived version of articles on the U.S. Attorney firings.) [For a related LLRX article, see The Government Domain: Government Documents in the News.] Another audience member asked about the overuse of the same experts to provide quotes for news stories. Scott explained that, especially when working on a tight deadline, reporters tend to turn to the same people who have proven expertise and a proven knack for quickly delivering the kind of quotes a reporter needs. He did say that his editors were taking a stand against overuse of the same quotable experts.

Alice Crites, the second speaker, is a graduate of the University of Maryland College of Information Studies. Before joining the Post, she worked for the Congressional Research Service. She has been with the Post as an investigative news researcher for a decade and recently became research editor. Alice has worked on Post teams for several Pulitzer Prize-winning news series. She is currently assisting with the new Post blog, The Fact Checker.

Alice described typical sources of requests for the researchers: “Someone gets a tip; we flesh it out. Someone has an idea; has it been done before?” The Post has a central library providing day, night, and weekend coverage. Researchers work in specialized areas, such as the foreign desk.

Alice cited a long list of government resources she uses constantly: Congressional Research Service reports (she says the Post has the same trouble getting them as everyone else does; see the related LLRX CRS guide); Government Accountability Office reports; statistics, and more statistics (crime, transportation and, most of all, the Census website); the Federal Procurement Data System for federal contracts information; Federal Election Commission filings; and Securities and Exchange Commission filings (especially for the information on the boards and officers), among others. Although many of these resources are online, she noted that there is still quite a bit of useful government information that can only be obtained on-site, such as U.S. senators’ legal defense fund documents, which require a visit to the Senate to view.

Now that so much information is available directly to the individual without going through the news media, Alice said the Post is working on building their own databases for analysis and added value. For example, they have been recording all public releases on U.S. casualties in Iraq and putting the information into a structured database to facilitate analysis. (Another example, although not mentioned by Alice, is The Presidential Field, a Post online feature including databases for candidate schedules and FEC filings.)

The changing news environment has meant that the librarians and researchers are constantly learning new skills, particularly in computer-assisted reporting and using and creating databases. They also set up resources such as blogs and wikis for reporting teams, as the schedule of a daily newspaper permits. Alice fielded a string of questions from fellow librarians in the audience, providing an interesting look into the world of research at a national newspaper. Fore more on the paper’s news researchers, read the Post’s July 2006 article, The Post’s Unsung Sleuths.