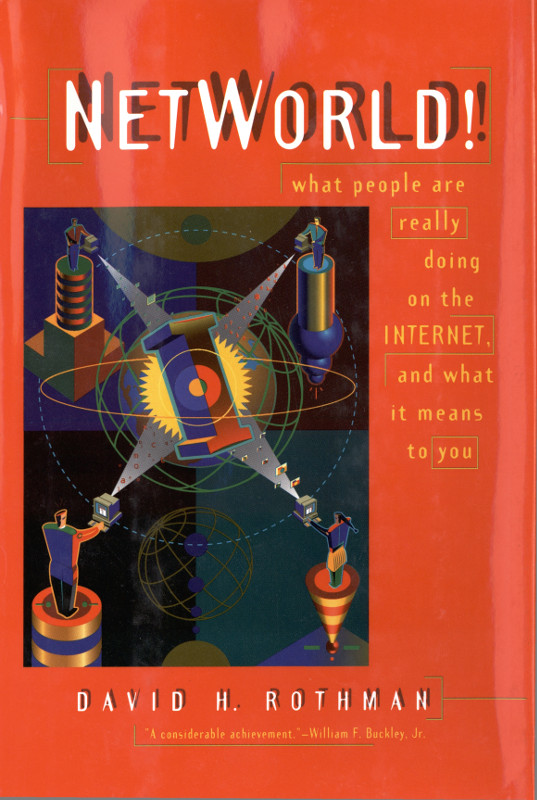 Mark Zuckerberg said this month that Facebook could be at least a partial substitute for churches, Little League and other community organizations.

Ouch! Is that what we’ve come to? I love the better side of Facebook, but should one corporation enjoy so much power over our lives?

Just how did we get here? If you’re looking for clues from two decades ago when the World Wide Web was still young as a mass medium, you should check out NetWorld: What People Are Really Doing on the Internet and What It Means to You (download page).

Prima, which merged into Random House, published the 1996 hardback of my vignettes of virtual life. This week Project Gutenberg unleashed NetWorld as a free edition in ePub, Kindle and other popular formats. Thanks to K. D. Weeks, Juliet Sutherland and TeleRead contributor Robert Nagle—among the volunteers who worked on NetWorld for Distributed Proofreaders. Contents:

As for ebooks back in the 1990s, I was pushing the idea of well-stocked national digital libraries, and of librarians enjoying far more of a presence on the Internet. The campaign goes on. National library endowments in the U.S. and elsewhere could help, complete with sufficient funding for marketing. The money is there. Just ten Americans are together worth north of half a trillion, and meanwhile Bill Gates is actually phasing out his global libraries initiative. Public libraries in the U.S. can spend just $4 per capita on content, and library endowments are a fraction of Harvard University’s $36 billion or so.

Now—back to NetWorld. What do you think? Just what has most changed about the Net and the Web in particular, and what’s stayed the same in those two decades? And based on what we know, what could be ahead—especially with the current FCC hostility toward Net neutrality?

For me, one of the biggest looking-back lessons from the NetWorld is the wisdom of the neutrality tradition. We have enough monopoly on the Internet today—the latest example is O’Reilly having to shut down its ebookstore.  Goodness knows where we would be without the tradition. Enough bad things have happened even with it. There is a place for the giants—I’m a loyal Amazon customer—but we need to keep the alternatives alive.

Other issues from the 1990s are still with us, such as widespread belief among policymakers that netizens should enjoy less privacy. If Donald Trump remains in office long enough to tamper with the national security apparatus, we could see massive spying for political purposes and even widespread blackmail against individuals. As part of the 2017 Presidential campaign, the Trumpsters didn’t do that badly by purchasing data from corporate sources and targeting naive voters. Thanks, commercialized Net! The worst could be yet to come. Al Gore and the rest, despite their negatives, were far more benign than the current crew in the White House and on the Hill. Quite unwittingly, however, he and other politicians from the NetWorld era may have paved the way for Stasi-level privacy invasions if the worst scenarios unfold.

The good news is that Trump may be impeached or resign before successfully remolding the NSA and the like in his image, especially with so many in the intel community hating his guts. But we’ve suffered enough black swans not to take anything for granted.

Editor’s note: this article represents the views of the author, and is republished with permission of the author from his site, TeleRead.