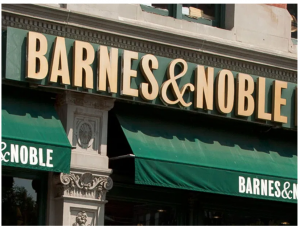 The Bookseller reports that in a memo to employees, Barnes & Noble CEO James Daunt warned that if stores had to close down due to coronavirus protective measures, employee layoffs were probable. He explained that employees would use Paid Time Off, then employees with at least 1 year seniority would receive up to two weeks of pay; employees of less than six months would be laid off.

Most B&N stores have remained open thus far, and perhaps surprisingly, Daunt noted that business in some areas of the stores (especially online sales and children’s books) had actually improved.

Daunt explained: “The context is a curious one which is that bookshops are doing very well as a result of this catastrophe that’s unravelling before us. Whilst it’s going on evidently people are shopping very selectively so supermarkets are doing extremely well but so are bookshops. Our sales are up very strongly but we’re necessarily preparing our company and our booksellers for the potential that it could come to a standstill.”

It does makes sense that bookstores would see an increase in business during this crisis. People who realize they’re going to have to spend what might amount to weeks stuck at home would want to stock up on reading material, and perhaps not want to wait the extra day for physical books to arrive from Amazon. (And they still prefer those print books to ebooks, it seems.) This seems to speak well for bookstores’ future even in this Internet age, if they can just survive the temporary closures that are seeming increasingly necessary.

Daunt’s frank and open communication to employees stands in stark contrast to 2018, when B&N laid off hundreds of employees with no warning after months of promising it wouldn’t. Daunt told The Bookseller that his experiences rescuing Waterstones had taught him the value of honesty so staff would be better able to prepare.

Not everyone is so impressed, however. Disgruntled employees and ex-employees posting in this discussion thread on The Layoff describe an earlier memo asking employees to continue coming to work and promising stores would get additional cleaning and sanitization. One skeptical B&N veteran wrote:

DO NOT BELIEVE BN

Here in TENNESSEE, They have not done a single thing to “deep clean”, disinfect or wipe down, our store. We, THE EMPLOYEES, mostly TEENS working PART TIME are wiping door handles and counters.

On the Bookseller story, a commenter also writes, “As a former employee, let the business die.” If Daunt seeks to win back employees’ trust, he’s got his work cut out for him.

Any length of time Barnes & Noble can stay open can only help its bottom line. There is mounting pressure to close “non-essential” stores, however, and already video game retail chain GameStop has made the major misstep of trying to claim it qualifies as an “essential” business because it helps support people who are working from home. Barnes & Noble isn’t going to want to make a similar mistake.

If bookstores do close, home shut-ins will need to rely on Amazon for their physical books. But even Amazon is having to pare back its rapid product offerings in light of the emergency, suspending warehouse reorders of nonessential products to prioritize household staples, medical supplies, and other high-demand products. (It’s not clear whether books are considered “non-essential,” as they aren’t mentioned once in the article.) And as warehouse workers are required to continue coming to work due to Amazon being considered an “essential business,” they fear that they’re all going to take sick and pass it on to their co-workers sooner or later.

As for ebooks, they will still be available in plenty, and rapidly, from Amazon, other booksellers, and library checkout services. And perhaps sheer boredom may drive some people who formerly never bothered with them to give ebooks a chance after all.

Will Barnes & Noble be able to cling to life even in the wake of the corona epidemic? It seems likely, if the closures don’t have to go on for too long. And at least they don’t have the same problem as movie theaters, which force hundreds of people into close proximity for extended periods of time. Who knows what’s going to happen to them?

Editor’s Note: This article republished with permission of the author with first publication on his site TeleRead.