I went through law school without ever seeing pictures in the law books I read. And only once did I imagine the parties in a case and give them faces – State v. Williams, 484 P. 2d 1167 (Wash. Ct. App. 1971). There, in my criminal law textbook, was the story of an Indian couple without a lot of education who were charged with manslaughter because their child died after they failed to take him to a doctor. They thought he had a toothache. Ignorance was not an excuse. I still visualize them and their pain at losing their child, and feel the same frustration at a legal system that would criminalize ignorance, and add guilt to their loss. Would I have felt differently if there were photos of them in the casebook and I could see what they really looked like?

Most law books I read, reviewed, or selected for our law library collections after law school were also mainly textual – words, words, words, on top of words, black text against a white background. Thomas A. Woxland and Patti J. Ogden’s Landmarks of Legal Publishing (1989) was an exception, but then it was an exhibit catalog. It took me until years into the profession to find law books with pictures, and color and to see the law and the real people it affected. And it was mainly when I was reviewing the D’Angelo Law Library collection to decide what to keep in the stacks, withdraw from the collection, or transfer to remote storage.

I didn’t realize at the time how rare it was to see illustrations in law books until I was deep in the project of reviewing every foreign, comparative, and international law book in our collection. Truck after truck of books. Looking through them and trying to find something entertaining, I spotted what looked like red blood stains on a book, and imagined murder in the stacks! (likely a red crayon or marker). It wasn’t until I got to the books on medical jurisprudence that things started getting interesting. And really spiked when I got to the German criminal law books and found fascinating photos of scholars such as Paul Johann Anselm Ritter von Feuerbach. And books depicting medieval punishments. So I determined that certain areas of law are illustrated, but it is very, very rare to find illustrations in law books.

Meanwhile, while I was seeking illustrated law books, I didn’t know that another law librarian had been investigating illustrated law books and had come to a different conclusion. Michael Widener at Yale Lillian Goldman Law Library started looking for illustrated law books while at University of Texas at Austin Tarlton Law Library. With the resources and support at Yale, he started to collect them. I saw glimpses of some of what he’d discovered via his illustrated law tagged postings on the Yale Rare Books Blog. I chuckled and marveled at the French law codes illustrated by Joseph Hémard, and the Laughing at Law Codes exhibit, but did not know the depth the collection Mike had built until very recently. Yale has over 2400 illustrated law books, over 4000 law images on Flickr, and special subject headings for locating law books with images in them in their MORRIS library catalog such as “Caricatures”, “Children’s books”, “Justitia”, “Satire”.

Mike shared his research on illustrated law books and the art of collecting them when he spoke at Melbourne Law School’s Rare Book Public Lecture on 18 May 2017 on “Picturing the Law” (we arrived at the same title independently! J). “A law book is one of the last places most people would expect to find illustrations.” Early in his talk he said he found out that illustrated law books are not all that rare. His quest began when a legal historian, the late professor Hans W. Baade asked the library to acquire the first edition of Battista Aimo’s De alluvionum iure universo (1580)’s treatise on riparian water rights, When the book arrived, he was surprised by the many woodcuts. The illustrations made sense to explain the law. “The images provided clear explanations of complex issues.” He further said: “Once I began to look, I found more and more examples [of illustrated law books]. I discovered that they were not all that uncommon. I found illustrations used to explain, or teach, or argue, or criticize.” The tree of consanguinity was one of the more common images used as a teaching aid to explain the law. Allegorical images such as Lady Justice. The Judgment of Solomon. Mike proceeded to show examples of some of the law books he’d found in his research and discuss the purposes of the illustrations therein. Images are used to explain the law, critique the law, and poke fun of it.

Mike then shared that he’d co-curated with legal historian Mark Weiner a major exhibition to showcase Yale Law Library collection – “Law’s Picture Books”. The exhibition is from September 13 through November 18, 2017 at the Grolier Club in New York City. The 140 books on exhibit are in 10 categories:

The full-color, 211-page exhibit catalog is available from Law Book Exchange and includes the following essays: 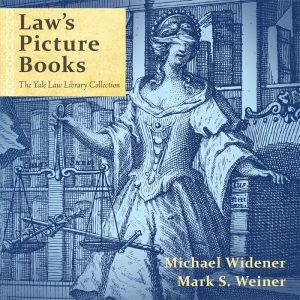 There’s also a companion exhibit which Mike co-curated Emma Molina Widener called “Around the World in Law’s Picture Books”. It’s a multi-lingual exhibit showcasing illustrated law books from 15 countries on six continents and can be seen at Yale Law Library September 1 through December 15, 2017.

Mike has inspired me to continue to try to build a strong collection of illustrated law books at D’Angelo Law Library. I started to pay attention when I saw any illustrated law book. Nathaniel Burney’s illustrated guides to criminal law and criminal procedure. Bound By Law (Tales from the Public Domain) by Keith Aoki, James Boyle, and Jennifer Jenkins. Any law comic or graphical novel. Disappointingly, a book on The Law for Comic Book Creators by Joe Sergi has no illustrations… 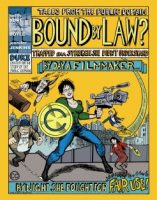 I asked rare book catalogers, vendors, and other specialists to let me know of any illustrated law books. I looked at what we already had in our collection and what we could buy to enrich it. Illustrated law book are difficult to identify in library catalogs. You can look for “Pictorial works” as a subheading. You can look in notes or description fields for illuminations, folded plates, illustrations, but these are generally not something added in non-rare book cataloging.