Are war novels too scary for kids? 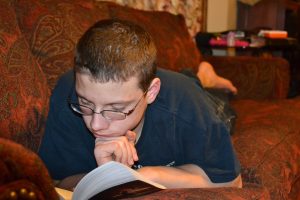 Are war novels too scary for kids?

My answer is: “Lots of ‘It depends.’” The biggest question would be, “How old is the child emotionally?” Some 14-year-olds can handle a bloody war novel that may not be right for the most sensitive high school seniors.

But due to all the much-televised horrors from the war in Ukraine, the general age limit may now be lower.

That’s a good thing, in some ways. Today’s children will be tomorrow’s voters. They need to understand the issues, ideally after discussing them with parents and teachers.

Years ago, as an elementary schooler reading about World War II, including references to the death camps of the Holocaust, I had nightmares about the Nazis breaking into our home in a suburb of Washington, D.C. Of course, books, movies, and TV programs disturbed me. But along the way I learned. Maybe part of that had to do with the kind of material I was reading, which often explored the suffering of the victims, rather than just glorifying the bloodshed.

My new book, Drone Child: A Novel of War, Family, and Survival, I’d hope, would be in the former category.

Lemba Adula, my Congolese hero reflecting on his days as a child soldier a quarter of a century earlier, writes about drone warfare: “Many of our victims surely would not even undergo burials, either because they would be missing or their bodies were in too many pieces. Dust to dust, in a sense. But that was God’s role, not ours. I once again pondered all the widows we were creating, and all the sons and daughters without fathers to hug them or take them fishing or encourage them in football or school. Would a 15-year-old have thought like that? Not many, I’ll grant you. But I did. That was my curse as a soldier and my salvation as a human, even if I still was not fully evolved.”

One of the questions in Drone Child’s discussion guide notes that Lemba Adula is “peaceful by nature but loves technology. How does he reconcile this enthusiasm with the reality that bad people can use drones, computers, and other tech for evil purposes?” Another question asks why one child soldier succumbed wholeheartedly to his terrorist captors while Lemba himself resisted them as best he could without their killing his parents. If I were a bright Russian tech fighting in the Ukrainian war or helping to develop weapons for it, such issues would be highly germane for me just as they would be to American techies at times.

Needless to say, I was endlessly gratified when the Readers’ Favorite site praised Drone Child for the “frank conversations it has the power to open for younger readers” on “the real-world plight of child soldiers.”

While I hope that Child enjoys a wide audience of many ages, I avoided obscenity and explicit sex scenes simply because they did not fit this particular book. Like many Congolese, the narrator himself is a devout Catholic. What about the violence? Probably far less gore than what you would see on occasion on streaming services or cable TV.

At the same time I’ve expressly said in my Amazon description that Child is for mature young adults and older (emphasis added).

For additional perspective on children and war novels, read a thoughtful clip from an old issue of Publishers Weekly: BEA 2013: Why Kids Should Read About War. “A realistic sense of what war is about is essential on many levels,” PW quotes Suzanne Collins, author of the Hunger Gamesseries. “If kids don’t understand conflict, how can we expect them to know how to resolve conflicts?”

Editor’s Note: This article is republished with permission of the author, with first publication on his site, DroneChild.