After the Ivory Tower Falls: A Book Review 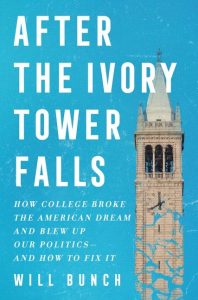 A mere 63 percent of U.S. high school graduates enrolled directly in college in 2020—a decline from 70 percent just four years earlier. What’s going on? Covid? And maybe more temptation to go directly to the shop or assembly line, given a booming job market?

Well, it’s a little more complicated than just Covid, and besides, workforce participation is also down. How about another reason? Could higher education simply be a sucker’s deal for many young people?

Philadelphia Inquirer columnist Will Bunch, a college founder’s grandson who wrote After the Ivory Tower Falls, joins the skeptics in calling for major changes. His grandmother began a small for-profit Illinois college—hardly Harvard but respectable and accredited—without having gone past high school. But badly crafted laws promoted the rise of diploma mills and hastened the end of Midstate College to some extent. Midstate, training students for such jobs as flight attendant, competed against greedsters hawking their wares through “high-pressure Glengarry Glen Ross-style boiler rooms.” Enrollment declined, and Midstate went bankrupt for other reasons. But if nothing else, the mills cheapened the value of education in general, especially for the sons and daughters of blue-collar workers.

In After the Ivory Tower Falls, Bunch among other things tells of students accumulating thousands of dollars in debt and either not graduating from the mills or not finding work after receiving fifth-rate training or education. The damage lingers. While I was writing this review, I read of the U.S. Department of Education canceling loans for 208,000 borrowers whom the ITT Technical Institute had defrauded. As reported by CNBC, “the relief totals $3.9 billion.” Imagine—just one sleazy under performing institution!

Among the main strengths of this important, highly readable book is its history of how we got into the mess in the first place. We blew our chance by not making higher education more of a tax-supported public good with academic values prevailing over commercial ones. The GI Bill and other measures helped, but what if the aid had been even more extensive with far less reliance on the marketplace? Even elite Ivy schools got caught up in the mania—wildly overpaying administrators and indulging in ever-more-expensive dorms and gyms and other luxuries to compete for the students from well-off families most likely to donate. So much for the poor and middle class, even with scholarships. The result was that America squandered brainpower.

Bunch tells how California education suffered when ideologues like Ronald Reagan warred against the education-as-a-public-good approach there. At the same time, all too many schools began to forsake their original visions of liberal education—with business schools and the like prevailing at the expense of English departments and others in the humanities. The corporate world itself would suffer in so many cases as narrow-minded drones ascended in the hierarchies.

Student unrest—unleashed by the Vietnam war and understandable anger over racial and economic inequalities—fueled hated of colleges and those attending them. After the four Kent State murders on May 4, 1970, some right-wing blue-collar workers phoned newsrooms to complain that the National Guard hadn’t killed enough students. I don’t need Bunch to tell me this—I was reporting for a daily in the factory town of Lorain, Ohio. Gallup found that almost three-fifths of Americans blamed the Kent students for their own deaths. I take the statistic more than a little personally, having written the hometown obituary of Bill Schroeder, the murdered ROTC cadet and former Eagle Scout who was several hundred feet from the Guard at the time of the shooting. Just think how I felt when I visited Florence and Louis Schroder and collected young Bill’s photo for the obit. I was just a few years older than their son.

Ironically, one reason for the student unrest was the tradition of labor organizing in so many blue-collar towns—yes, the same forces that had made older workers prosperous enough to be open to cynical and all-too-successful GOP manipulation. Republican legislators retaliated against the protestors and jacked up tuition and otherwise made it more difficult for the children of blue-collar workers to go to college. Bunch correctly writes that we can blame the aftermath of Kent State in part for the nasty tuition increases that resulted from cutbacks in government aid to higher education.

The harm from Reagan, former House Speaker Newt Gingrich, and friends wasn’t just to our colleges as educational institutions. Bunch sees a cultural split that educational inequalities exacerbated. He divides Americans into four groups defined “not only by what they had but by what they felt they had lost in a nation of broken promises”:

—“The Left Perplexed are the generations advantaged by changes in American society after the end of World War II.” Consumed with protecting their gains in both economic and social status,” such people fear the anger of both Trumpists and youthful radicals embracing socialism. Many voted for Hillary Clinton and don’t understand their Bernie Sanders-loving offspring.

—“The Left Broke are, for the most part, the children of the Left Perplexed.” Still scarred by the competition to go to elite institutions and saddled with onerous student loan payments, they see college as having been a “formative political experience” and are open to major changes in areas ranging from race relations to economics. Everything fits together both in the past and now. Racist politicians have been among the most implacable foes of the education-as-a-public good concept—fearing increased opportunities for minorities.

—“The Left Behinds are the baby boomers and Gen Xers who were raised in a bygone world in which they could go directly from high school to a job that provided a middle-class lifestyle.” They hate the knowledge economy that has replaced “their assembly line regime.” Trumpists galore!

—“The Left Outs are the forgotten young people born into shrinking factory towns, or isolated communities—or urban poverty—who were never on the college track and then, adding to social injury, were judged as lacking merit or worth, for not getting their degree.” They retreat to drugs and the online world—while forced in the real one to labor in soul-sapping jobs in retail, fast food and warehouses.

How to respond? Bunch thinks that merely cancelling college debts would hardly lead by itself to a nirvana—especially given the resentments arising among college grads who saved, or Americans who never got a chance to go to college in the first place. He favors far more resources for trade schools for young people not interested in or suited for college. Perhaps most of all, he dreams of “universal schooling or training benefits for all young adults, funded as a public good and not as a high stakes pass/fail test of self worth, centering critical thinking and civic engagement over rote workforce development.” He also delves into the possibility of universal national service, not just limited to the military.

I like Bunch’s goals. The question is whether they can be achieved in the current political landscape, especially with the low likelihood of military spending being dramatically reduced in the near future. Still the threats to Ukraine and Taiwan will not last forever, and maybe, just maybe, the Middle East will cool down in time. There is also the possibility of the young Left Brokes, Left Behinds and Left Outs eventually garnering enough clout to change the tax laws to support both the world’s most powerful military and free higher education and vocational training.

One way or another, I hope that the basic visions of Bunch and the likeminded can be realities in time.

Meanwhile, in diagnosing the many evils of the current system, he has given us a good laundry list of what not to do in the future.

Update: Here’s how Bunch reacted August 25 when President Biden, in the columnist’s words, said Washington would “free some 20 million Americans from the ball-and-chain of college debt and reduce the burden of 25 million more—by forgiving up to $10,000 in loans for everyone but high earners, and up to $20,000 for working-class Americans who’d qualified for Pell Grants.”

Bunch notes that the President has trimmed just “$300 billion-plus off the debt mountain that has risen to an astronomical $1.75 trillion, still leaving a difficult path ahead for millions of other borrowers when pandemic-frozen payments resume in 2023. But it’s mainly because the bigger hill of expanding educational opportunity to all of America’s emerging adults, and making it free or affordable, remains unaddressed.” Still, he correctly regards the loan forgiveness as “one giant leap” toward the idea that higher education should be a public good.”

Click Here for an in-depth video interview with Will Bunch.

David H. Rothman’s latest book is Drone Child: A Novel of War, Family, and Survival (originally titled No Taller than My Gun).

After the Ivory Tower Falls: How College Broke the American Dream and Blew Up Our Politics”and How to Fix It
Will Bunch
William Morrow imprint of HarperCollins, New York, 2022
$28.99 Hardback / $14.99 Ebook / $27.99 Audio

Editor’s Note: This article is republished with permission of the author. An earlier version of this review appeared in OpEdNews.