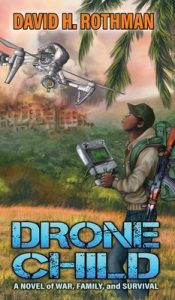 I, Lemba Adula, happen to be the hero of Drone Child: A Novel of War, Family, and Survival. So here I am, a Congolese villager turned self-taught hacker turned child soldier turned military drone expert turned sea-going pirate turned university student turned entrepreneur turned major industrialist. Just why did David Rothman write what he says is my fictional war memoir? Rather presumptuous, if you ask me. But here’s Monsieur Rothman’s side of the story about that detail and a few others.

Q. So why this book?

A. Well, it started out some years ago as a movie script suggested by a Golden Globe judge in Hollywood who himself contributed some parts of it. Ray Arco, a Holocaust survivor, thought that George Clooney might go for the project. Clooney’s wife is a prominent human rights lawyer. And what could be more a violation of human rights than forcing young children to murder their parents and become child soldiers? Ray is dead now, and I haven’t the slightest idea of whether Clooney even knows about the script and the novel. I suppose I’ll approach him eventually after I’ve marketed the book some more.

A. Far more complicated than that. As a former poverty beat reporter, I’ve done my share of rooting for the underdog. Also, for some years, I’ve helped judge a major journalistic awards competition in the human rights area. Perhaps most important of all, I’m Jewish. Yes, wars traumatize the people who live through them. But that is not all. They can also leave scars on the children of the survivors and even on people who simply happen to be of the same religious or ethnic group.

In my case, my mother’s family had distant relatives in Germany who almost surely disappeared in the Holocaust. The same might apply to members of my father’s European Jewish family. I am not religious and never was, but the modern history taught in religious school made a deep impression in me, as did discussions of the Holocaust in the media. I actually dreamed of helmeted Nazis breaking into my family’s house. Those nightmares were not of the intensity of yours in the Congo, or of the actual Holocaust survivors. But to a lesser extent I could feel what had happened. In elementary school I even horrified a teacher with a story about an Auschwitz-style crematorium.

Later in newspapers and on television I learned of murdered civil right protestors, including at least one Jewish man, and I began to make connections. The rise of fascist demagogues in the United States has increased the possibility of a new Holocaust here—against Jews as well as People of Color. As shown by the Pittsburgh synagogue attack, we already have isolated pogroms. And of course, Blacks have had pogroms of a sort against them—countlesss lynchings and the destruction of neighborhoods and business areas and the killing of the people there. Police murders of innocent Black suspects are, of course, tax-supported lynchings in effect.

Q. In your book just about all the haters and killers are Africans.

A. Human rights violations are human rights violations no matter who commits them. What’s more, so much of the misery in the Congo is the legacy of King Leopold of Belgium and his monstrous white colonialists. I make that clear. Also, in some ways Drone Child is a sociopolitical allegory very applicable to the United States and some other countries. Members of different tribes kill each other not just over resources but also because they can’t stand people different from them. The real issue isn’t merely race per se. It’s differences. Let me add that Drone Child is less about race than it is about war, family, technology, and the interplay between them, especially from a human rights perspective.

Q. Aren’t you forgetting something in the book ascribed to me? I not only thrive, I survive. Perhaps my memoir will inspire young people, especially those growing up in rough neighborhoods. Of course, I was lucky—fate easily could have flattened me. All I could do was try.

A. Yes, may young people growing up amid violence and poverty—whatever their skin colors or religions, whatever their locations—be their own Lembas and successfully seize opportunities that come their ways!

Note: Rothman is reachable at [email protected]. He thanks Junior Boweya and civic activist Jean Felix Mwema Ngandu in the Democratic Republic of the Congo for vetting and critiquing the Drone Child manuscript.

Editor’s Note: This article is republished with permission of the author with first publication on his site, Drone Child.
FacebookTweetLinkedIn
Posted in: Education, Libraries & Librarians
➤
Close